Probably you read already my introductory post and guessed so far that I am not a superstar investor. Thus don’t expect me sharing my ultimate 2000% earner super-hot-handpicked-stock-portfolio or a user manual for how to grow magic beans properly. There are smarter and more skilled bloggers and advisors who can fill this void. To be honest until my thirties from the trinity of Earn-Save-Invest principle only the former two was obvious to me. 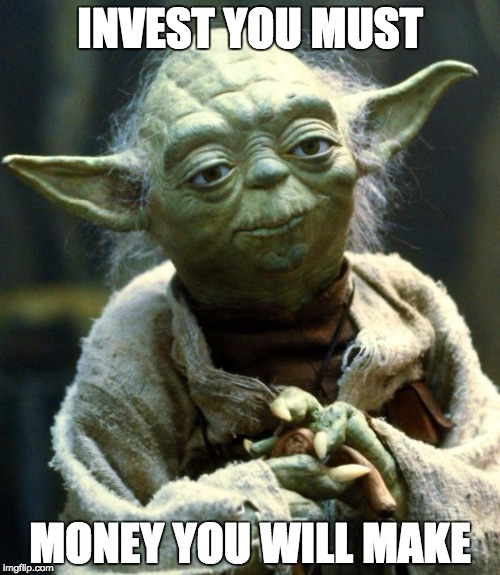 As a kid, I earned money doing chores, got pocket money every sometimes and received as a gift for birthdays. I remember my grandfather opened me a savings account once with a 100 DEM deposit. When he gave me the “account book” (is this the word for it?) and explained to me what it is I was happy but even at that age (maybe around 7), I was more confident with cash. It turned out it would have been a better idea as not so long after the government decided that they need money, closed the bank and walked away with my savings without even saying thanks (you are welcome, by the way). So I learned the lessons pretty early that things aren’t perpetual and don’t trust the Big Brother and their Companions.

Never had problems with saving either. Having access to limited amounts of money only makes your decisions more deliberate. I could say that I was raised to being frugal, just didn’t know back then it is that. Never was a big spender and always on the quest of squirreling away money, sometimes for years to afford a bigger purchase. I paid for my first PC with my own cold hard cash (nerdy note: a marvelous machine with an AMD K6 200 MHz processor and 32MB of ram under the hood). It would be good to continue the list with my first car and apartment, but this never happened as we became kind of broke by that age. The blooming days of the artificially nourished communism turned into a “democratic” dictatorship and after long years of bleeding in the endgame, the economy was bombarded along with the country.

In the western world investing is natural and people are comfortable with the idea of the stock market. Through my childhood I only heard the word “investment” in terms of business actions and we heard that there is a thing as stock exchange where criminals wealthy businessmen can trade with stuff in large amounts. We get to know stocks after the system changed and the days of the true(?) democracy arrived in which we are thriving living to the current days.

There was a strange new term by the time called privatization. In a nutshell government owned companies sold. Don’t question the methodology behind this, I would neither (hint: it had something to do with corruption and politics I guess).

As the result of the process a lot of citizens ended up with some shares in the biggest companies, just to sell them as soon as possible to cash out before losing it’s value (after a single “investor” get the percentage to be in charge of decision making the rest of the shares were not really needed, thus prices fell). I followed this trend too to reap a whopping $35 in local currency. Sounds like it worth it, right?

My only investment so far

I probably dived more into the past than the message I want to spread on this topic requires, so let’s get to the point. Despite having a history described above I could proudly report that I have invested a small amount of money in the last couple of years. Cannot really talk about diversification, because I have put all the money into a single asset. It is called ME.

If money is your hope for independence you will never have it. The only real security that a man will have in this world is a reserve of knowledge, experience, and ability.

Yes, I wrote this long intro just to sell the advice that “investing in yourself” is the single best thing you can do with your money. Especially in times (or circumstances) where there aren’t good options. And I am not talking about not having giant televisions or beast cars on sale. When advanced investment options was not an option for me and the interest rates on the only one I knew (savings accounts) fell under 1 percent I started to buy books, courses and other information products to change and improve my mindset and develop my professional skills. This is the area where you can harvest gains which cannot be taken away from you and probably have best ROI you will ever expect.

An investment in knowledge pays the best interest.

-Benjamin Franklin, Founding Father of US

To summarize this the take-home message is that it does not matter what is your background investing is always the best thing you can do with your surplus money. But at the first place always consider investing in Yourself.

2 thoughts on “The best investment advice I can give”